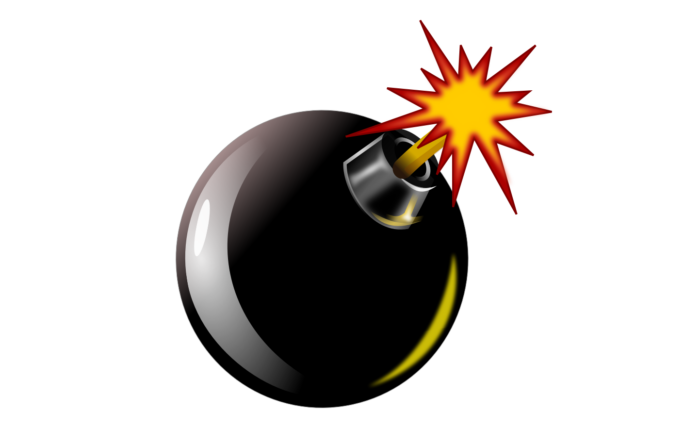 In a row of superpowers in Loquiz, a new one called “Bomb” is available. When a player acquires bomb superpower, they can put it on another team’s way or event on their locations (if other teams’ locations are shown) For the team who got bombed, it will interrupt their gameplay for two minutes.
Along with multiply and teleport superpowers it adds an option to create games with another layer of surprises in them.

Create a task, choose answer type to be Superpower and then Bomb. Save.

An example of a bomb task text.
“Awesome. You have acquired an superpower to bomb! You can put the bomb on another teams’ way or straight on one team’s current location! When the bomb is placed, it will be shown to all the teams but when somebody steps on it, it will disappear for all!”

Bomb pin is on the map for all players. The pin can be any image you choose it to be (like a nuclear suitcase, big red button, dynamite, TNT etc.)
Each player can acquire the bomb pin once. For example, when you have one bomb task in the game and there are 5 teams in the game, then each of them gets to set up bomb once.
When the player arrives at the spot they get a notification that they have the bomb superpower now and can set it up on the map or even put on another player.
After placing the bomb on the map the activated bomb icon will be visible on the map for all teams.
Whoever (including the player who set up the bomb) will walk into the bomb radius, will trigger it and their screen will be deactivated for 2 minutes. For rest of the teams, this armed bomb will disappear.

Note that bombs placed during playing in test mode will also stay on the map for players as a trap.

-make bomb superpower tasks invisible pins and radiuses and give the players qr-s to scan during the game. Meaning they can decide to bomb someone during the game any time when they scan QR. You could give multiple bombs and each team’s strategic decision is when and who they bomb.
-make bomb give minus points. So to get this evil power, team has to decide to sacrifice some of their score.
-Give this superpower as an award after completing an activity. So players can optionally use it any time during the game as a tool to hold back winning team or as a prank.

Check out public library in Loquiz PRO for some superpower questions.