Add uncertainty and depth to your game through the “On Track” blocks! + 5 examples 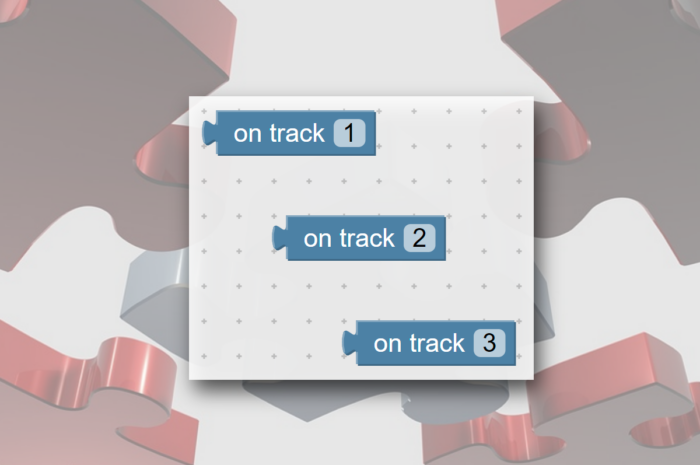 When you are building a game, you’re wondering: What does it take to make deeper rules? In the beginning, when everything is simple, we often create linear games. The story remains the same for every player. The questions, the events, the challenge too.

What if you want to make a game that behaves differently from one player to another? By doing so, you will create interesting interactions between your players. And you’ll add even more depth.

Using the Loquiz Creator, this is possible. With this block, you’ll be able to add uncertainty to your game:

What “On Track” blocks are about?

“On track” is a condition that depends on the order of the Player’s connection: Right after they’ve entered their team name.

The first player will be “On track 1”

The second player will be “On track 2”

The third player will be “On track 3”

And if we only have these 3 blocks in our whole game, do you know how it will work from the fourth?

The fourth will be labeled as “On track 1”. Did you guess it correctly?

The sixth will be “On track 3”, etcetera.

In other terms, you’re simply redirecting players to different tracks. And each player’s order of connection is quite random, adding some uncertainty to your game.

5 examples of “on track” usage

Until now, we’re very theoretical. Let’s not remain vague. So I’m going to show you 5 cases where you can use the tracks:

1. Spread your players all over the field

2. Add random items to your players

You might not want to have a game with a predictable outcome. Since the order of the players’ connection is unpredictable, this gives some nice uncertainty. In this way, you can entertain the player even more.

In fact, this is what I did with the Missing Easter Dinner game. Depending on your order of connection, you will find yourself with different eggs.

Give different roles for the players

Is your game based on role-playing? The initial choice of the role might be the toughest challenge overall. Why don’t you let the randomness choose your role? Attribute a track for each role, right at the beginning of your game.

Is your game based on story-telling? Then you might want to tell a different story for each player. Indeed, if they receive a new perspective for each, they’ll find it more entertaining. In fact, I’ve already developed about making different story parts for the players here (I called them “relay baton games”).

You might want different challenges for each team. Imagine they are in the same room, and they shouldn’t exchange the solution with each other. Or they can also obtain different hints for the same riddle.

I would be able to come up with even more examples of how these blocks can be used. Besides, I hope that the usage of this block is understandable for you now. If you want to discuss more game ideas using the track, feel free to book a 30 minutes meeting with me!