From teachers to pupils 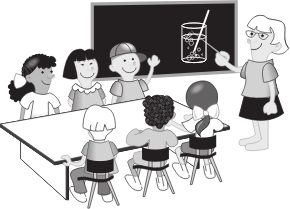 One of the games of Loquiz organised for children took place in the Luhtre Holiday Resort, about 70km away from the Estonian capital, Tallinn. The game was organised by teachers for the members of the student council as a reward for their good work with the student council. 30 participants, aged from 12 to 16 were divided into 5 teams.

This time, Loquiz was used as a way of fun learning.

The teachers who wanted to organise a day out for the student council, approached the adventure company 360 Degrees and asked for a suitable game for the children aged 12-16. Egle, the instructor of 360 Degrees said: “Loquiz was kind of a logical choice, we were sure that the children had not seen anything like this before. The tablet computers also added to the value of this game as they are more entertaining to use than pen and paper.”

Why was it special and what kind of questions were used?

This game of Loquiz was one of the first ones ever created for children. The usual questions in our database are meant for adults so this game needed a whole new approach, it could not be made too difficult as children could easily lose interest if they see that they are not doing very well. Popular television game show “Are You Smarter Than a Fifth Grader?” was taken as a rolemodel when developing question. Location based questions were also included in this game about the Luhtre Resort. The location based questions were the same as they are in the game for adults and the youngsters did not have too much difficulty answering those.

Our instructor, Egle was positively surprised about this game: “It was my first experience of carrying out a game of Loquiz for children so I had my doubts before the game but as I got there, I was very positively surprised. It was a pleasure to supervise this game. The children were very motivated and I have to say, they listened to the instructions much more carefully than most of the adult groups who play! As they paid attention, they understood the point of the game very-very quickly and game flow was smooth.

Course of the game

The game was supposed to be carried out in the dark so headlamps and reflective vests were handed out before the game just to ensure the safety of the participants. It made the game more challenging, and there were more wrong answers during the game than usually but the children were very motivated after getting a question wrong, to get the next one right and still have the possibility to win the game. The maximum distance covered was 7.7km, a bit more than in usual games but as Egle said, the children were very competitive and did not mind using their energy to run more.

All the participants were very happy with the course of the game and the questions seemed to suit everyone. The main thing was that the children had a sense of competition and that really kept them motivated to go on and win the game.

Egle also enjoyed carrying out this game and said that it was very easy and smooth to organise it. “The children were happy and the introduction part was easier than with adults because the kids do not worry about the locations of the questions and are not that concerned about many things. They just wanted to get out there and give it their best shot.”

Although it has not been tried too much in the past, cases like this show that Loquiz can be useful for children who are interested in learning something new. We are hoping that this would become a trend in the future and that we would see a lot more children trying out Loquiz. Knowing the age group of participants can help the organisers a lot in order to create a perfect game for them. To be successful at Loquiz, only motivation and enthusiasm is needed, everything else comes naturally!