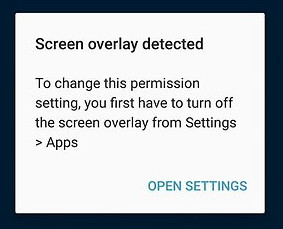 Screen overlay allows apps to display content on another app ( like facebook messages, whatsapp, Twilight). The issue is that when starting Loquiz first time it asks for rights to use the location and camera. When there is an overlay running, rights can not be changed. Here is how to overcome the issue.
Loquiz does not use screen overlay and we do not restrict other apps to write on the screen while Loquiz is running. However Loquiz app is affected by the screen overlay issue as Android does not allow for changing access rights for the app while there is an overlay app running on top of it.

This means the issue is most prevalent right after installation on first start when Loquiz needs to ask for Location, Camera and Photos access. So when you run Loquiz app and some other app that overlays other apps is running in the background, you might encounter a warning message. The screen overlay issue is present starting from Android 6  (Marshmellow and Nougat). From this version onward Android allows one app to write on the screen (overlay) while another app is running.

One way around it is to deactivate the app that provides the overlay.

But the best option is the following:

If Loquiz is installed and the Overlay issue emerges please just go to Settings-> Apps->Loquiz->Permissions
and tick all three:  Location, Camera, Storage.
Going back to Loquiz app (Loquiz might need to be restarted) the overlay should not be an issue anymore because Loquiz has the needed rights.

More detailed explanation for user can be  found here: http://www.howtogeek.com/271519/how-to-fix-the-screen-overlay-detected-error-on-android/

You might have used to generate tickets in Loquiz to sell the unique passcode for individual players as tickets. What... 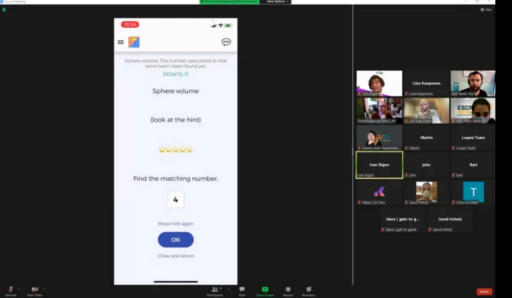 You’re hosting a webinar on Zoom or Meet. And immediately, one feeling sets up in the room: Awkwardness. How so?...