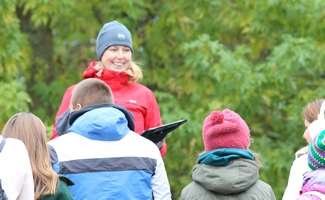 While the goal of gathering together is to have fun while playing an outdoor team building game, it starts by briefing and dividing people into teams. There are several methods that facilitators use to divide the group. It usually has to be quick and effective- it might be good to mix up people from different divisions of the company and break up usual friend groups. I interviewed Adventure Company 360 Degrees instructor Kaarina to get the best tips she uses for dividing people into teams. In your opinion, in what cases is it practical to let people divide into teams by themselves and in what cases should the instructor take the initiative?

I am usually ready to take the initiative myself as an instructor. This is good to avoid stretching the start of the team building game and keep up the enthusiasm. Sometimes it happens that the person who takes initiative is within a group.

How much time do you usually spend for forming teams?

Depends on the size of the group. With small groups a minute but in large events a bit longer. The dividing actually goes quickly. You just have to line them up!

What methods do you use for dividing people into teams? How can you divide participants into mixed teams so that they get to cooperate with colleagues they don’t see every day?

I usually brief the main contact person from the company to get some background about the people and how they should work together during the game day. There are four good ways to line up people:

Men-women. You should ask people to stand in line- men to the left, women to the right. Good for having gender mixed groups where a game’s nature and competition needs equal balance.

By divisions/departments. You ask people to  line up by departments. For example, side by side at the beginning of the line is the Sales department, followed by Management, HR, Accounting… etc So people stand next to their usual co-workers. Later that order is mixed and people get to play a game with colleagues they usually don’t see.

Countries of origin. This is well suited for an international meeting to get networking going, or large corporate annual gatherings with people from different parts of the world. Line up people from left to right alphabetically by country of origin  from  Afghanistan to Zimbabwe. Later, the order is mixed again so people are encouraged to work as a team apart from their fellow countrymen.

Work experience in years. Excellent for mixing people who have worked decades in a company and newbies. Ask people to line up by the number of years they have worked in a company so that those who are new are to the left and experienced ones to the right.

All these line-up methods should be followed by letting people count 1, 2, 3, 4… from the left to right.

For example, let’s say you have 62 participants and in this game you need teams consisting of 5 people. 62: 5 = 12, 5 This means you will have to form 12 teams. You ask people start to count so that first says out loud 1, the second says 2, third 3… until the 12-th person. The thirteenth person starts from the beginning- 1 After that you ask all numbers to gather together with their team and voila! you have 12 teams. It sometimes happens that one team is bigger, but it is no big deal. What problems do you encounter during dividing people into teams and how do you handle that?

There have been cases where people don’t agree to go to the group that turned out with any of mentioned randomization methods. It happens seldom, but I have seen adults sneaking into another team quietly. Usually, I don’t pay attention to it when the exact amount of team members is not crucial. Only when I see an extremely large team or small team compared to others then I suggest evening out the difference and divide into groups equally.

Once I conducted a language game where it was crucial to have diversity in the teams based on their understanding of different languages. The questions just happened to be composed so. One nationality insisted on sticking together out of shyness or for unknown reasons. They were aware that this makes playing very hard but went on to play anyway. Overall it was not much joy for them as this game’s goal was to use people who speak different languages in one team to get to the finish. So mixed teams are in some cases crucial!

Have you noticed how people choose the team name and what is the most fun/clever one you have ever seen?

Quite often people use the number they got while lined up and counting to be divided into teams. There is always some team who names themselves as “Winner”. Once a team used a full sentence from an inside joke on that event day.

Thank you Kaarina for the insight!

Share in the comments below what is your favorite method of dividing people into teams? 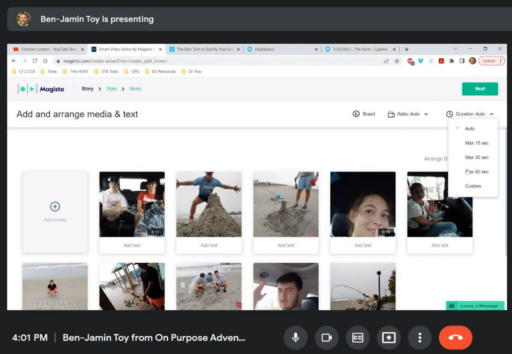 Ben-Jamin from On Purpose Adventures event company shows how to quickly edit videos after his customers have played the scavenger... 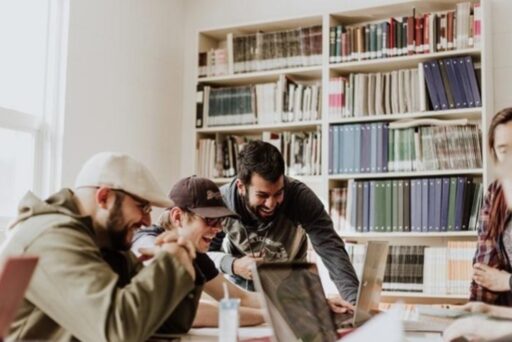 When producing an event, an organization should make the most of every resource it invests in, especially content. Particularly, we...