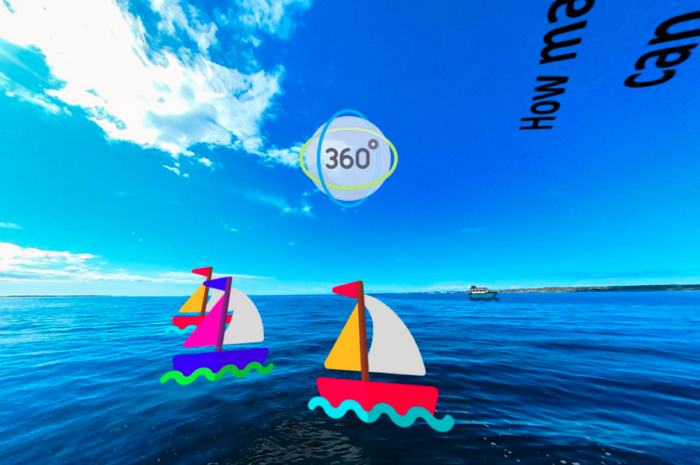 In this article, I will show you a super game idea that your players will love.

Do you know you can edit 360 pictures and add elements in there? Look at this.

First, find the riddle in the sky. Then, try to solve it.

Note: If you’re on a mobile phone, tap on the squared symbol on the right side. It will use the motion of your phone. And this adds up to more immersion.

So, did you find the answer? If you do, congrats!

You can actually test more 360 riddles like this one from a Loquiz game I’ve created.

Then, scan the following QR:

You can also play by typing the following:

Some other ideas of 360’s riddles

So, how do you find these riddles? Depending on your game, you can easily adapt to make something fun. Here are a few ideas:

If the ideas sound promising, then here comes the next question:

How is it possible to implement and edit a 360 photo in Loquiz?

First, to implement it in Loquiz, I explain it thoroughly in this article. As I describe, you can indeed use or rent a 360 camera (like my Insta360 One X2). Then the platform Momento360 will be perfect to host your 360 pictures.

Consequently, you’ll find yourself with a nice Loquiz game using 360 photos. Though, how can you add some nice graphical elements? Here comes the magic:

I advise you to use the software Affinity Photo. Indeed, it’s very complete as a photo editing software. Like the famous Adobe Photoshop, you’ll have 360 photos editing. Unlike it, you can use pretty much any tool. And it’s MUCH cheaper than Photoshop (a one-time payment of EUR 55.-, when there are no discounts).

Once you’ve made a 360 picture, you can export the raw 360 picture to your computer. Then open it using Affinity Photo.

The following tutorial will explain to you well how you can edit it:

This great software allows you to save it back as a raw 360 photo file, which will be publishable on Momento360.

Do you have any ideas that you’d like to implement? Then I can help you with this. You can book a 30 minutes demo with me here.