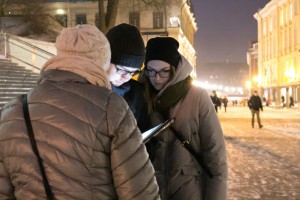 So, on one chilly winter day, everything got a little warmer because we headed out to test the scavenger hunt in Tallinn Old Town. During the event, we found out some things that needed to be improved, but after a few makeovers and a bunch of tests, the scavenger hunt game type is ready to use.

Take a look at our  thorough tutorial  and sample game concept.
Besides that read a case study on how the scavenger hunt game was run in northern Norway.
Or head straight to Loquiz PRO, log in and try out creating your own scavenger hunt!

Here are some  pictures from the sneak peek game held in Tallinn: The games’ concept was still a mystery for most of the people; so playing took some real brain work from even experienced team building instructors. At least the expressions from the players faces might prove it is the best scavenger hunt app they have gotten their hands on. By the way, Tallinn Old Town is in UNESCO heritage list and is one nice compact authentic medieval place to wander around.