In Loquiz QR and EAN codes (barcodes) work as task activators, which means that they open the tasks once the player points the built-in code reader at the QR or EAN code. QR and EAN codes are additional activators – all the regular activators (GPS, iBeacons) still work, but these codes can be used in addition to those.

The QR and EAN codes exact behavior depends on the game type:

Printing out the QR codes

QR codes are automatically generated for each game, you can choose how many (1, 4, 9 or 16) QR codes are generated on one page. On the QR codes page you will find QR codes and above the code, there is also some extra information: task’s number (order), task’s short intro and regular intro. Use these intros to give extra guidance for the players, e.g. what is the task’s topic. 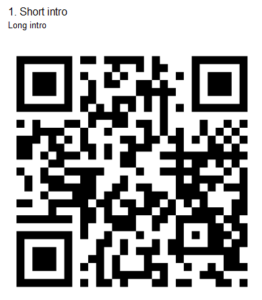 You can download specific game’s QR codes PDF file by clicking on the game’s name in the “Games” list, game overview info opens up, there you will find “QR codes” tab, which you need to click, and then press “Download QR codes”: 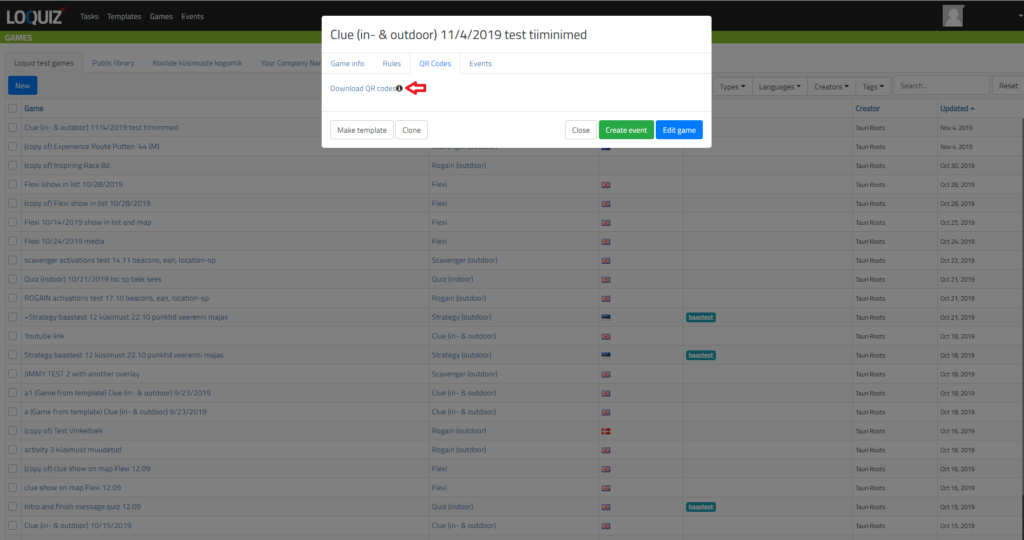 In addition, now you can download an individual QR for only one task. Open already existing task and go to the Activations tab. Clicking on “Download QR for this task” will download a png to your computer. PNG is ideal if you need to insert QR to your own game material designs.

Using EAN codes in the games

To use EAN codes in the games you need to connect EAN code with the task. For this, you need to know EAN code (numbers). These codes are normally printed on the package of some product and have a different amount of digits (the most commonly used EAN standard is the thirteen-digit).

To connect task with specific EAN code, then while creating/editing the task, go to edit task and  choose Activation tab. 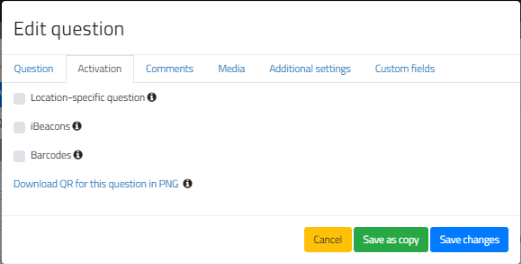 Tick “Barcodes” write EAN code there (without spaces), for example, 4009300010241 After saving, this EAN code is connected with this specific task. 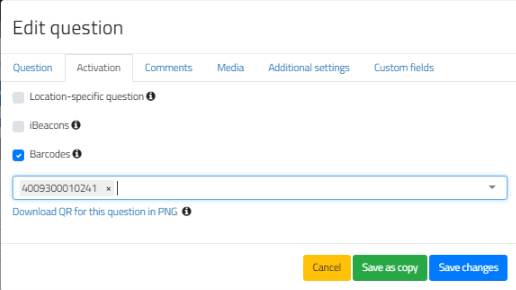 Note that you can use one EAN code for multiple tasks, in this case, tasks will open one-by-one meaning that you need to scan multiple times to open multiple tasks with the same EAN code.
You can also use multiple EAN codes to be activator for one the task (for example if the product is available in different sized packages then whatever size player scans, it will open task). Remeber, once task is opened, players will have to answer. This task can not be opened again by scanning the barcode again.

How to use code reader in the game?

In the Loquiz there is built in code reader which you can use to scan QR and EAN codes. Code reader can be opened from the app’s main menu only. To scan the code, player needs to hold the mobile device (smartphone or tablet) over a QR code, so that it is clearly visible on the mobile device’s screen. Then task will open automatically. Note that code scanner still follows the game specific rules – if the task has already been opened or is not yet discoverable, it will not activate. If the code is recognized but the specific task cannot be opened due to game rules, then the player is taken back to the game screen.  If code is not recognized, the back button will take the player back to the game screen.

Hiding or showing code scanner in the game

For this feature to work you´ll have to enable Show code scanner option (Edit game > Configuration > Design > Show code scanner). The QR and barcode code scanner button will be available at the bottom right corner of the screen and in the menu option.

Please update to the latest version before opening a ticket!v