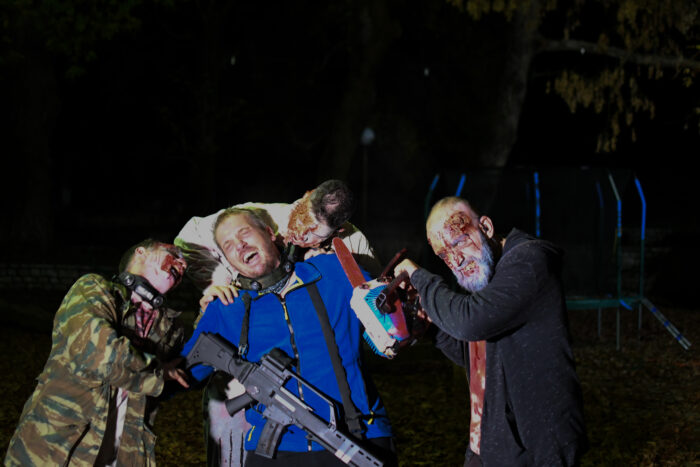 Many-many thanks for Petros Dagdilellis and the SUMMIT team (from Greece) for making the success story sharing possible.

Petros, please tell us about the game concept.

The zombie game is a combination of scavenger and laser tag/tactics game. The story goes as follows: the participants are visiting a rural (forested) area for a pleasant evening walk.

They meet strong military presence in the area and are told that the whole forest is contaminated by a virus that escaped the nearby military lab. The army is mobilizing, but the orders are to use any possible help to stop the contamination. So the participants are drafted and trained on weapons.

The goal of the game is to infiltrate the core of the contaminated area, find the vaccine ingredients, create the chemical solution that will decontaminate the area and release it to the environment. There is a catch, though. The virus turns the locals into bloodthirsty zombies. So a secondary goal will appear during the game. The secondary goal is to place explosives that will destroy the area and escape in time!

What was your inspiration to compose the Zombie Game?

I love horror movies and I love escape games and scavenger hunts. These passions were forged in my head after a Loquiz meetup in Greece when Miguel Ferrero mentioned the zombie run games! So I have to give credit to him for introducing me to this new type of entertainment.

What is the format of the game?

The game was a scavenger hunt game (also in Loquiz). There were two teams of players fully armed with very realistic laser tag weapons. They were following different clues and were visiting different areas to collect the vaccine ingredients.

The total time of the game was 2 hours. It was mainly an outdoor game except for the final mission when both teams had to visit an abandoned building, locate the explosives and start the bomb counter. It didn’t produce a winning team, rather it produced the feeling of winning back your life after a traumatic experience!

How many people were involved in building and preparing the game? Approximately how much time did it take to have the concept and the game with Loquiz ready?

It took 4 people to design the scenario and the flow of the game. It took 15 people to set up the game and run it (10 of them were zombies during the game). It took us about 30-man hours to conclude a specific scenario and set the goals, missions and twists in the game.

We’ve spent 2 days inspecting the area of the game, looking for hazardous spots, checking the mission spots, locating where the different props should be placed, talking to the local authorities (municipality, police, fire department).

The Loquiz part of the game was the easiest job in the whole project. The game was a scavenger hunt that revealed new missions once the previous ones were completed and also informed the players for emergencies and the locations where they could find ammunition and medic kits (the players were running out of “bullets” and were also “injured” when attacked by zombies).

Does the game require any particular setup onsite?

It does require several props. For example, the bomb is an airsoft prop combined with loudspeakers and a series of electrical detonators that start fireworks and flares once the bomb is detonated.

We literally confiscated a local restaurant to use as our headquarters where the game master and the team of the laser tag specialists were placed. So, you do need a place with internet and enough space to prepare 30 weapons, have 10 actors put on makeup and turn into zombies and overview the whole action in order to orchestrate the zombie attacks and also help the teams when necessary.

So far, what have been the participants’ emotions while taking part in the game? What did they enjoy the most?

The participants only started talking about the game the next day. I believe the shock and surprise were overwhelming! Their initial reaction of the shock was slowly turned into amazement for the “movie-like” experience.

We had comments such as:

“I was scared in several moments, but mostly I was in awe of the fact that I was in complete darkness in a forest fighting off zombies. Even now, I cannot comprehend the details and lengthy preparation you guys did for this game.”

How did the Loquiz platform complement delivering the game?

Loquiz was the tool for both the game makers and the players. Without Loquiz, we would need to inform the teams for new missions and emergencies with boring notes and radio calls. Loquiz is the cement that bonds everything to a solid scenario.

For the players, it was the only contact with the “army headquarters”. It was the only light in the darkness (also literally) . Without it, I believe it would be impossible for them to orientate in the forest. It would be like playing “call of duty” without a map and the heads-up display! (nerdy comment).

Can you highlight some of the features in Loquiz that you used?

I have used the time activation, the task activation, and of course, I used the new feature of task opening sound in order to immerse them even more into the game! (radio chatter sounds, alarm sounds etc.).

A special military map was used as an overlay. We allowed only the Google Maps to be available for the tablets and manipulated the colors and info on the maps with the custom map option. This setting created a feeling of isolation for the tablet user since we chose to “erase” the civilization from the map (no buildings, no monuments etc.)

What is the best part or task of the game that you personally like?

I liked the secondary mission of the game a lot when the teams infiltrated the abandoned building. This building was scary, to begin with, so add zombies, blood on the walls and fireworks… and you can’t go wrong!

The best task in Loquiz, I believe it was the moment when they started merging the chemical agents of the vaccines. They were getting constant task activated tasks that gave them the specific order in which they had to mix the ingredients. (We had to contact a chemical engineer to get a recipe for a non-hazardous chemical mixture that would create a nice effect). The ingredients were non-reactive at first, but as the chemicals were adding up, the solution turned from blue to red, then created smoke and then foam! All these were able to be executed precisely via the tasks appearing on their tablet.

Based on that specific experience – what advice would you give to other event professionals when they start to run games with Loquiz?

My advice is simple! Get good hardware (tablets), don’t stop yourself when thinking about the game possibilities. You should go extreme in your head and the reality will filter out the impossible. If you start thinking about limits, your game will be lacking in awesomeness!

Always put your tasks in order, it will help you to “see” the flow of the game when the tasks are adding up to a few dozens! Play the game in your head… and when you’re finished building it, test test test! Testing is part of the creation process, it’s not just to verify the end result. It will help you see if something that you see on the platform as great is, in reality, a bad idea.

Last but not least. Stop yourself (or have someone else stop you) before you make a monster! Remember, not everyone is an ultra gamer! Oh! And trust the software! It’s the best out there!