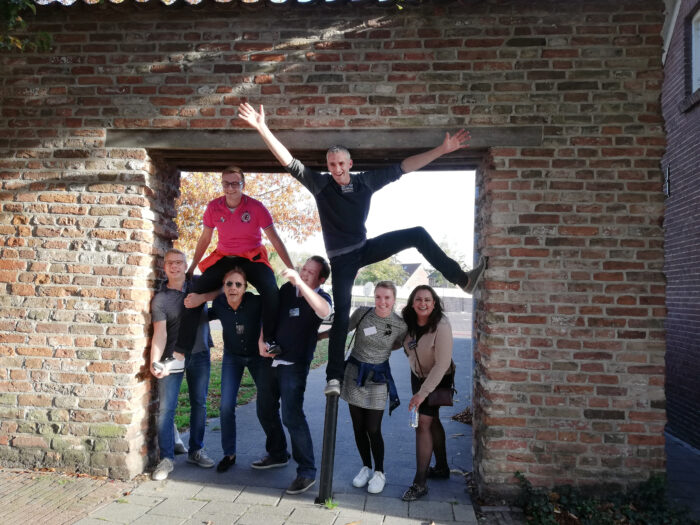 Our warm thanks go to Robert Jan Thomassen and to the SOS Events’ team (the Netherlands), who were providing that inspiring overview of their initiative.

Robert Jan, please tell us about the game concept.

A good concept is easy to understand and hard to tackle. So is the Escape Tour: find the secret exit within two hours. Each city has its own local, famous character. Some have cheated their wife, some have committed a murder, some are falsely accused.  All of them are hunted and have a very good reason to escape the city. Fast.

Where did you get your inspiration from to come up with such a concept?

We already had something similar to the corporate market. We saw the unique edge we would have over other concepts when we would combine those games with our own booking system, making it fully automated and aim for the leisure market.

Does the game depend on the season?

No, the Escape Tour can be played year-round, 24/7 and doesn’t involve an instructor or any other help. When a superstorm happens to pass by when you are about to start the game, just wait and hit the start button when all cows have landed safely.

How many people were involved in designing and preparing the game? Approximately how much time did it take to have the game finalized?

We started brainstorming with about four people and created a blueprint. We then created a few games in different cities, tested them with real people and fine-tuned the concept. All in all, it took us about three months to launch ten cities.

Since April 2019, about 10.000 tickets have been sold (one ticket being a 2-5 people team). We have covered more than 20 cities by now and are adding cities every week.

So far, what have been the participants’ impressions while taking part in the game? What did they enjoy the most?

Participants name the unique way to discover a city most frequently. We fly over to each city to create an Escape Tour that is specifically made there, so no duplicate questions between cities. If you have played one, you haven’t seen them all. Tasks are actually made on the spot, so participants really live the story they are in.

We would like to explore your experience with Loquiz. How did the Loquiz platform complement the game delivery?

It gave us a cornerstone in our fully automated concept because of the intuitiveness of the app and the easiness of creating rock-solid games. For this concept, we use Loquiz in an unusual way. We implemented previously unused or non-existing features. Both the app and the backend consequently proved itself as reliable and bombproof.

Can you highlight some of the features in Loquiz that you used?

For the sake of our success, we had to simplify the game because we aim for a (very) large audience. Therefore we created a rather simple game type, but we went all-in with supporting features like batch passwords, callback URL and such. We rely heavily on monitoring features, so we can use all the data to improve our concept.

Tell us about your future plans with the Escape Tour.

Right now, we are developing cities fast (while maintaining the quality), meaning that other companies are jumping in with us and have started to create content as well. Therefore we expect to hit the 50 cities mark in a matter of months. In about 1,5 years, 150 cities will have an Escape Tour.

Can you feel/ measure the impact on the success of your business?

We started with the Escape Tour as a side project, but it quickly developed into a profitable and mature concept (we soon hired someone specifically to develop this further). Because once an Escape Tour is up and running, little cost is involved in keeping it going. It’s like sowing the seeds, help it develop a little and then sit back and watch it grow.

What advice would you give to other event professionals when they start to run games with Loquiz?

Despite the vast amount of options you have with Loquiz, it is not a magical game creating-machine. You should still have a very good concept and then use Loquiz to create spectacular stuff. But once you start to get to know the Loquiz platform, you will have more potential concepts, then you have time to create them. Do place a notepad by your bedside.